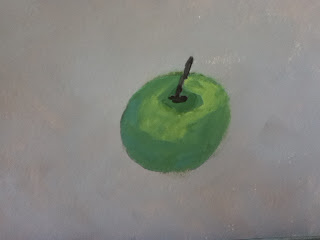 Second one.   This time I used a color ground of burnt umber (Liquitex Basics) so I wasn't painting directly on white paper.  It seemed to get me into painting quicker, too--nothing to think about, just start doing.   For the apple I used the Golden Open Acrylics Traditional Color Set.   These paints were nice and thick compared to the Liquitex Basics, and stayed wet the entire time I painted.  The downside is that they are expensive.

Despite several flaws (the subject is too small and out of proportion--it looks like a green cherry more than an apple, it is incomplete--basically an apple floating in the background with no cast shadow, the colors don't convey 3 dimensions,  etc), it is better than my last one.

What I learned from this painting:

Today's Inspiration:
Ira Glass on the creative process
Posted by mj at 11:13 AM