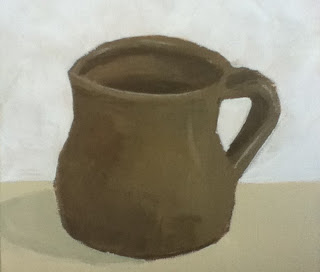 I think I'm sticking with acrylics.  The last couple were done using Golden Open acrylics with some Liquitex Basics titanium white because I ran out.  Golden Open are starting to grow on me.  I found these Strathmore 6 x 6" acrylic pads of paper at artmart for $5.00, so I picked up two of them.

I was looking at the analytics for this blog and saw that someone had found it by searching on the words "i'm finding it so hard to paint but i want to."  I know how it feels.  If it's just you with a couple of books and some YouTube videos, it's hard and frustrating.  You can't compare yourself to the great stuff  that's out there.  You have to compare yourself to what you've done before.  Every little better thing you do is progress.  Keep painting.

This painting was frustrating at first.  The colors were wrong, the paint wasn't going down like I wanted it to, etc.  I kept having the urge to go do something else, but I stuck it out and eventually it became enjoyable.    It's a great feeling when the complaints in your head quiet down and you just paint and let it happen.

Today's Inspiration:
Tor.com: Picturing Autumn, an Equinox Celebration.  There's some beauties in there.
Posted by mj at 3:50 PM No comments: 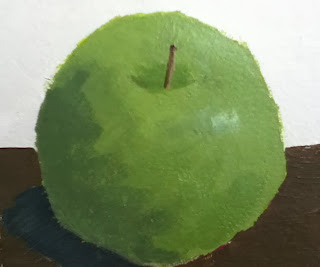 Another Apple.  Back to acrylics.

Today's Inspiration:
The Lines and Colors blog.  Charley Parker always finds interesting stuff to share, across a wide variety of different art styles.
Posted by mj at 2:44 PM No comments:

The first one was a simple still life of 3 bananas and a couple of  apples.  I had barely started when the urge to quit overwhelmed me.  I rushed through mixing the colors, knew they weren't right, but wanted to get something down.    I wanted to sketch out a drawing first, but did it in charcoal which was really dumb.  The paint mixed with the charcoal and I ended up with 3 terrible-looking bananas.  I threw the painting away, packed up my supplies and quit.

Of course I got mad at myself for giving up so easily, so a couple hours later I pulled out my paints and started again.  The second painting I consciously chose something simple:  a picture of a lemon I found on morgueFile (which is awesome, by the way).   I failed at color mixing, rushed, ended up not putting enough paint on the palette, had to stop and mix more color that didn't match well enough with what was already in the painting, rushed through the initial shape of the lemon botching it in the process, got frustrated and pitched it.

This is why people quit.  These are the thoughts going through my head right now:


And a bunch of other nonsense.  I want to write this down because I'm not going to quit.  There's too many things I've wanted to learn, or too many hobbies I've wanted to try where I've been in this exact same position and ended up moving on to something else.  It's a pattern I know too well.  I don't want to move on to something else.   I'm going to come back and try again.  This is just how it feels and works when you stick something challenging out.

Email ThisBlogThis!Share to TwitterShare to FacebookShare to Pinterest
Labels: meta 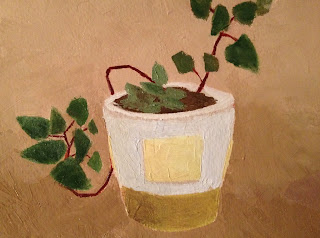 Finally an update.  The only positive thing I can think to say about this one is that it was my first experience with oils.  I fought this thing every step of the way for 3 nights.  I lost energy by the time I started on the "leaves" inside the pot.  I need to stop switching paints and stop painting objects floating in space.  On to the next.

Today's inspiration:
The video to Blown Minded by Young Galaxy.  It's an animation done by Carine Khalifé.  She hand-painted every frame of the video in oil on glass (read the awesome description she provides under the video).  I think I watched it 8 times in a row when I first found it.