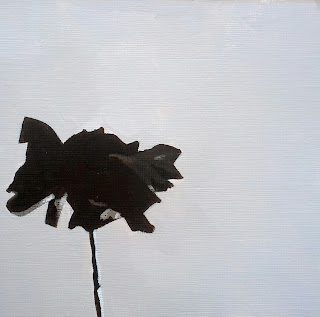 I found this flower picture on morgueFile and thought it'd be easy enough to paint.  Golden OPEN and Heavy Body acrylics on acrylic paper.  I love the colors Heavy Body can make, but really dislike the drying time.  The only reason I used it was because I ran out of OPEN Titanium White. 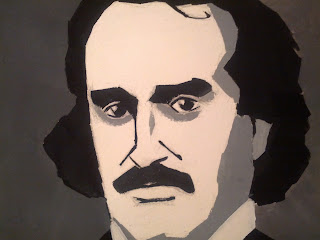 So here I am on day 2 focusing on drawing.   I make a drawing I'm unhappy with, and have the itch to paint it.  What do you know--the painting turns out okay.   I don't know why, but I used Gouache and loved it.  The edges are rough in spots, the tones aren't the best and I struggled with the consistency, but this is the first painting I've made in awhile that made me smile.
Posted by mj at 9:13 PM No comments:

A few weeks ago, Armand Cabrera wrote a post on his Art and Influence blog that punched me right in the brain:


Students spend their time seeking the magical pencil or brush that their favorite artist uses. They are looking for that one brand of paint or canvas to solve their problem. They believe that with the right materials they will be freed from the drudgery of miles of repetitive work needed to succeed.

Man, does that hit home.

I haven't been doing enough.  It's hard to find time for this dream stuff when I have a day job and a family, but I want it badly enough that I should be doing more.  With my new focus on drawing, I'm going to commit to making at least one drawing a day, no matter how simple or complex. Every day I'll draw something, then post it to my Drawing a day Flickr set.  No more throwing stuff away--I'll post one drawing a day no matter how I feel about the results, starting today.

This incredible 9+ year thread on ConceptArt.org by Jonathan Hardesty documenting his progress of learning to draw and paint.

Yesterday I tried to do another painting and was so frustrated by the outcome that I did what I promised I wouldn't do anymore--I threw it away.

In trying to increase the potential for good paintings,  I have been drawing the subject pretty tightly, then painting over the drawing.   I am ruining good drawings with horrible paint jobs.  Drawing is so much more "direct" and controllable than paint and allows for undoing (erasing) what you have done.  What happens between my eyes and my hand when there is a paintbrush in it is baffling me.  I've gotten so frustrated with the difference between what I see in my head and the results I make that I'm going to focus more on drawing until I can figure this out.   There is still so much for me to learn about line, light and shadow that drawing can teach me.  I'm hoping that concentrating on draftsmanship will teach my hands how to work with my eyes.

After throwing away more paintings, I've decided to slow down.  I'm still having a hard time seeing how light interacts with a subject, and an even harder time painting it in color.  My attempts at painting people have been a disaster.  There are too many variables for my brain to handle, which leads to really bad results and frustration.

For this exercise I printed a value scale I found on the web.  This is actually the second one I painted.   I experimented with gouache on the first one, and it came out a disaster (man, do I have respect for people that can use gouache).   Even though this one has issues, I'm starting to feel bad for throwing stuff away instead of posting.  I switched back to acrylics on this one and had a small epiphany while painting it--by the time I reached the top row, I was able to squint and mix a closer tone.   After lots of failure, it was nice to have a victory.
Posted by mj at 10:55 AM No comments: